Bardia National park is largest National park in the lowland Terai area of Nepal covers an area of 968sq.km. Situated in western Terai of Nepal, it was established to protect representative ecosystems and conserve tiger and its victim species. Originally, a small area was gazetted as the ‘Royal Karnali Wildlife Reserve’ in 1976.

In 1982, the area was renamed ‘Bardia Wildlife Reserve’ and in 1984, it was extended to its current size and 1500 households of the Babai valley were resettled outside the park, allowing the vegetation and wildlife to grow. The reserve was given the status of a National Park in 1988. In 1997, an area of 327sq.km.of forest and private land surrounding the Park was declared a buffer zone. The National Park and local communities, together kick off community development activities and manage natural resources within this zone.

The park extends from the Churia hills, southward to the gentle slopes of the ‘Bhabhar’. The higher grounds of the Churia have dry, deciduous forest of the mostly hardwood sal. In all, Bardia is home to more than a hundred species of forest trees. The porous slopes of the Bhabhar support large, open grasslands, known locally as ‘Phantas’. These are some of the last outstanding grasslands that once covered much of the Gangetic plain. Many of the larger mammals live in and around the Phantas and so they are the finest places to view animals, the most evident of which, is the spotted deer.

The western boundary consists of the many waterways of the Karnali, which have created many large and small gravel islands. A mosaic of grassland and reverie forest of acacia, sisam and large, buttressed silk cotton trees covers these islands and much of the lower ground area. In spring, the silk cotton blooms and the forest comes alive with scarlet flowers.

The original people of Bardia were the Tharu people, who possibly migrated from the Thar Desert in Rajasthan, whilst fleeing Muslim harassment, in about the 13th century. They cleared areas of forest in order to plant their crops and supplemented their diet with plentiful game and fish. Much of the Nepalese Terai is still populated by Tharu people.

Bardia is the home to 53 species of mammal, 25 species of reptile, over 400 species of bird and 121 species of fish. Of course, the most famous inhabitants are the majestic, Royal Bengal tiger and the Greater one-horned rhinoceros. There are also leopards and several species of smaller jungle cats, sloth bear, hyena, wild dog and jackal and two species of monkeys: the langur and the rhesus macaque. It is also famous for its small herds of wild elephants, which are seen rarely. Bardia also boasts small populations of the rare gharial and Marsh mugger crocodiles and the endangered Gangetic dolphin. The island of the Karnali River harbors the sub-continent’s largest antelope species, the nilgai or blue bull.

More than 300 butterfly species, over half of Nepal’s butterfly population, may be found in the National Park as well as many snakes and amphibians, including the Indian rock python (Python Molurus) and King cobra (Opiophagus Hannah) and more than a dozen species of lizards and frogs. 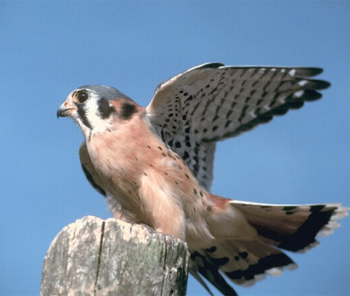 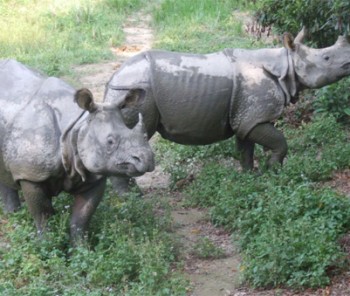 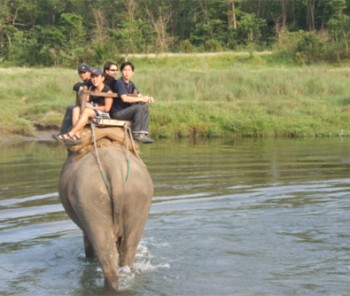 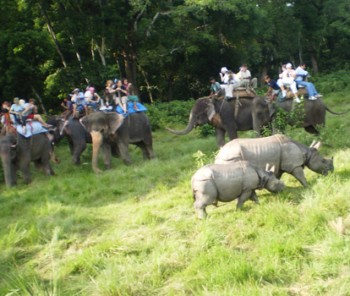